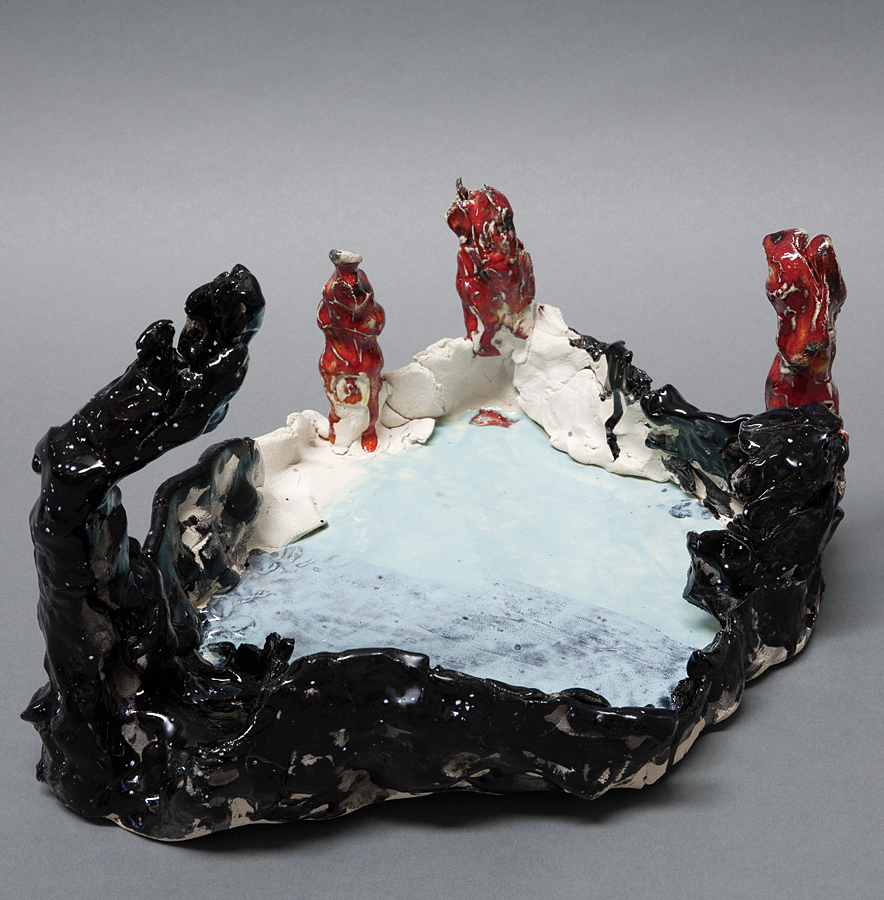 Gloria Zein’s ceramics stage a trace of violence. They tie in with artistic traditions that go far back to hominisation, as they manifest an archaic creative urge that originates in an incomprehensible abyss on the borderline of the sacred. This connection becomes obvious with prehistoric clay objects, such as fertility statuettes, ceramic props from sacrificial rites or insignia of sovereigns, priests and gods. Their interrelation with an elemental force reincarnates in Gloria Zein’s objects – as destructive power, the creative force of nature, or as apocalyptic purification.

The glazed ceramics from the past three years bear witness to hand-made artistic creation. Their soft, organic forms and colours connote flesh and the human body. We can see (involuntarily, with a gaze striving towards identification, to attribute meaning, to re-construct likeness): corsets and crutches; prostheses and plaster casts; medical bandages and patches – this resilient and yet deficient imitation of our sensitive skin; but also martial equipment, such as armours, shields, helmets and formerly proud heraldic banners. Far from being oppositional, each of them is ambivalent. Like hangovers of an act of war, like defiled, poorly mended and sometimes charred residues of an originally sound and intact, possibly dulcet form, they evoke wounds and vulnerability. At the same time, being the manifest trace of violence, they threaten us. Also the scene of war is on display: ruins, memorials, and arenas. There are objects reminding of defense and prison towers, of mediaeval dungeons, of cages in which delinquents were exposed to derision, and their dead bodies presented as deterrence; or of baskets in which women on witch trials were submerged in rivers, lakes and barrels. Other very complex, nearly indescribable objects appear as small burnt landscapes, collapsed buildings or theatres with demolished scenes. On their tiers, there are blood-red spectators, solidified as if buried under a lava flow, telling of destruction and beweeping the irrecoverable loss.

Cultural history tells many stories of homunculi, often suggesting a correlation between artistic and mythic creation. Romantic literature took inspirations from the legend of the Golem of Prague, who was allegedly created out of clay by rabbi Loew in the 16thcentury. In a ceremony, his master spoke a magic formula and placed a paper with the word “shem” (god) under his tongue, which raised him to life. The rabbi alone could contain him by removing the paper. Joseph, as the golem was called, was a good servant who willingly fulfilled duties that were forbidden to others on Shabbat, or repelled anti-Semitic attacks at night. But once the rabbi forgot to take the paper out of his mouth, and Joseph went wild, smashing everything in a blind fury, until the rabbi commanded: „Joseph – stop!“ and removed the paper. Another version of the story tells of the destruction of the golem, which was the rabbi’s only way out to put an end to his creation’s riot.

Gloria Zein’s ceramics keep secret about their previous fight. The clearer, however, they tell of their ambivalent existence as both victim and perpetrator. They, too, could be the relics of a machine running out of control, of a conflict that has become independent from its adversaries. And so they betoken the never-ending duel between progress and conservation, science and moral, and the consequences of any kind of imprudent hubris that sooner or later will take its toll.

This website uses cookies to improve your experience while you navigate through the website. Out of these, the cookies that are categorized as necessary are stored on your browser as they are essential for the working of basic functionalities of the website. We also use third-party cookies that help us analyze and understand how you use this website. These cookies will be stored in your browser only with your consent. You also have the option to opt-out of these cookies. But opting out of some of these cookies may affect your browsing experience.
SAVE & ACCEPT