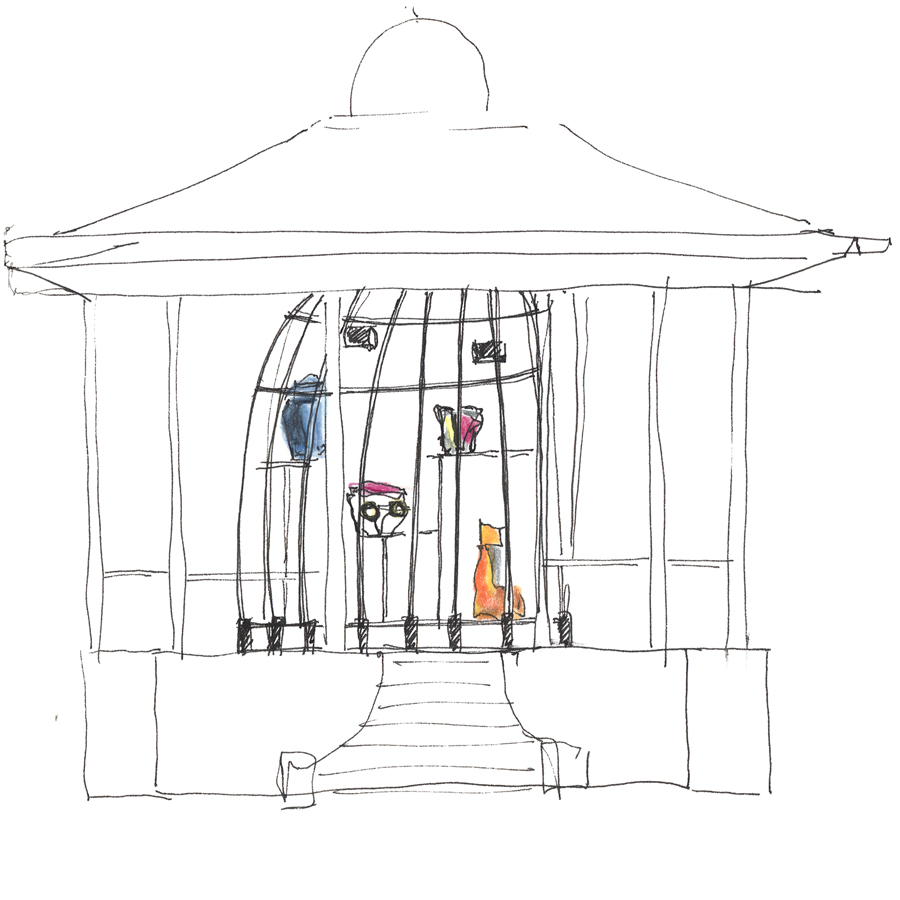 Since 2003, the town Melle, located in the west of France, organises an international biennale of contemporary art. For its 8th edition, « Le Grand Monnayage », its history is valorised: The theme derives from the Frank kings’ silver mines, characteristic for this small town. In fact, from the 5tht to the 11th century, Melle has provided the entirety of silver that made up the Carolingian kingdom’s coin money.

Completing her residency, she created a sculpture for sheep: du vertige de la contingence. Simultaneously, the artist presents her work Faire partir l’ombre in the centre of Melle, inside the bandstand located on its main square. The two works’ titles complete each other forming a single phrase, Faire partir l’ombre du vertige de la contingence. They result from the artist’s engagement with the town and its history as well as from her observations at the lycée agricole.

From a rather performative approach, Gloria Zein has progressively oriented her artistic practice towards sculpture and drawing. Her understanding of space makes the artist privilege site-specific interventions.

For the bandstand, she conceived a strange aviary. Organically shaped ceramic forms may remind us of abdominous humanoid bodies, emaciated faces or chests with prominent bosoms. However, on closer inspection, when studying the sculptures’ inside, a structured, organised universe reveals itself. Like constituting architecture, the work’s supports, which the artist leaves visible or even valorises, seem to form an internal city or a building with several rooms. These fragile ceramic forms are separated from their surrounding by a visually highly present steel cage. The layout amongst this metal form, which evokes a bent birdcage, gives them an allure of immobile animals. Thin walled ceramics are normally not presented outside, in urban space. However, while placing them at the bandstand, Gloria Zein questions the value of things. She brings forward the objects’ vulnerability. The bandstand, place for gatherings, becomes a scene where these silent, static creatures can be observed.

The forms in Gloria Zein’s work are either rather geometric or organically shaped. In any case, there is little trumpery. The work is there, coarse and sometimes disruptive. Yet, as soon as one gets closer to scrutinize what’s going on, the pertinence of interventions as well as the artist’s humorous approach unfold.

For the lycée agricole, a secondary school for agriculture, Gloria Zein conceived a sculpture for animals. Interested in the sheep she dedicated them a work. More than a spiralling contingency (vertige de la contingence) it could be read as a hymn praising contingency. Installed on their meadow, the sculpture has instantly become a privileged place for the sheep: Adults rest at its side while lambs climb the structure to sleep inside. Devised as a hayrack with a slotted belly sitting in its centre, du vertige de la contingence is also a mini arena that welcomes a loyal paunchy monsieur in disguise. It could be a corpulent dancer, too. While liberating the spectator’s imagination, Gloria Zein creates a sculpture with almost human presence, somewhere between circus scene and fantastical personage.

This website uses cookies to improve your experience while you navigate through the website. Out of these, the cookies that are categorized as necessary are stored on your browser as they are essential for the working of basic functionalities of the website. We also use third-party cookies that help us analyze and understand how you use this website. These cookies will be stored in your browser only with your consent. You also have the option to opt-out of these cookies. But opting out of some of these cookies may affect your browsing experience.
SAVE & ACCEPT